The Dutch championship is open, which means that a foreigner can become Dutch champion. Reinhard did it the Italian way, he sailed all races on his own and won the single-handed cup. A lot of helmsmen had heard the weather forecast: heavy winds even up to 35 knots in showers and most of them decided to sail the dinghy with two persons. The dinghies got finally 26 knots in their 9,5m2 sail and because Dutch dinghies are classic and heavy they can handle it. Well, almost all of them! It happens of course that some dinghies capsized.

The first day there was no stable wind at all. Seven times the committee tried to make a valid start, but after a short time the races were always abandoned, because of a lack of wind. The second day four races were sailed and every time Martijn van der Pol was number one. An excellent result and the base for his final victory.
On the next day Pieter Bleeker / Geja van Ommen were in a good shape and won the last two races, also in heavy wind conditions.
It was not enough to give them the second place overall: Jeroen de Groot / Damy Jansen are sailing always consistant and ended at number two, just ahead of Pieter.
The dinghy of Jeroen has number NED368 and was build in 1935. A real classic! Pieter's brother Wim Bleeker was sailing with his son Marcel Bleeker and ended at number four. Erik van der Meer and his wife Jacqueline Bijder were number five.

After four races the fleet was split into a gold and a silver group. The silver group was won by Jan Bart and Blanche Lucas. A former world champion in the Solo class. On the first day they capsized, their mast hitting the head of another dinghy sailor Bert Bos. Fortunately no damage to persons or boats. 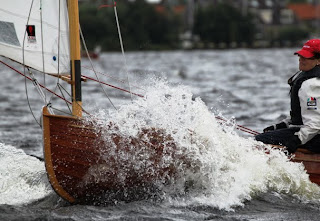 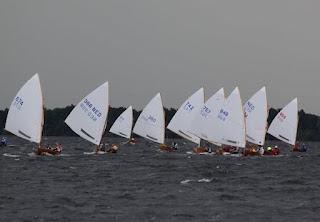 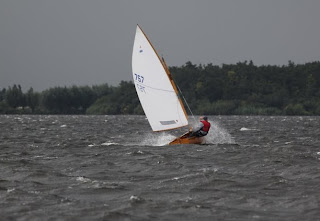