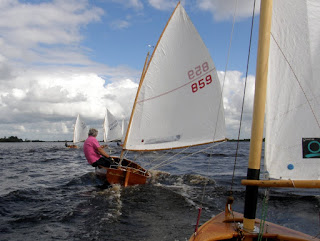 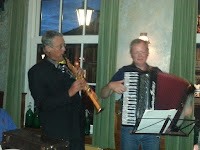 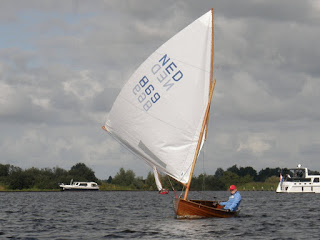 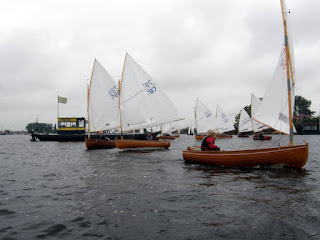 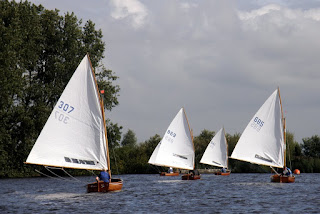 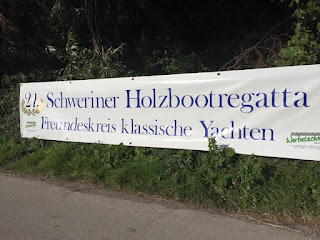 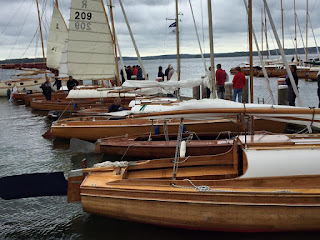 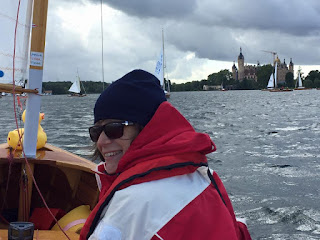 written by Vincent Delany
The championships took place in Dun Laoghaire on 30th. August under the burgee of the Royal St. George Yacht Club. It is a number of years since a Class Championship was held in Ireland, but since the class centenary in West Kirby in 2013 there is a serious revival of the class, not only in Ireland but also on inshore and lake venues on continental Europe.

Why do two classes have a combined championship? The answer is that the International 12 Foot Dinghy was the one-design boat used in the 1920 and 1928 Olympics. Following these events there was a growth of interest in the class in Britain and in Ireland, and many boats were built in the 1930s. In Dublin Bay in the 1960s there was a suggestion that the International 12 Foot Dinghies as an open boat were taking too much water over the bow, so the Dublin boats were modified by moving the mast further aft, adding a small jib, and a foredeck. Today, the Int. 12s and DBSC 12s race against each other on an equal footing. The boats can be sailed singled handed or with a second person as a crew.

Race one was held inside Dun Laoghaire Harbour in a 4 knot northerly wind, which was unstable and soon started to veer towards the east. George Millers Pixie sailed a perfect race to take the gun from Scythian sailed by Andrew Johnston, and Albany sailed by Tim and Gail Varian.

The wind had settled in the east for race two. Again, Pixie led the fleet from the start and progressively increased her lead from the bunch behind. At the finish it was Pixie followed by Mark and Matthew Delany in Cora who managed to hold Scythian astern. After the two races, crews took their boats ashore for a liquid lunch.

In the afternoon, racing was in Seapoint Bay, the traditional home for the 12 Foot Dinghies in the 1930s. The wind had increased to about 8 knots from the south east with a flat sea. By this stage the fleet were growing in confidence and beginning to put pressure on the dominant Pixie. At the finish it was Pixie, Cora and Scythian who were able to maximize benefit from the ebbing tide.

The final race was run on a larger course with more rounds of the course. Would Pixie be able to win again? Initially Scythian sailed very well, and on the offwind leg she had better speed than Pixie. Then on the second beat the two boats entered a tacking match. At one stage Scythian crossed ahead of Pixie and by the time they reached the windward mark these two had pulled well clear of the rest of the fleet. However Pixie recovered the lead by clever tactics, and she worked hard on the offwind leg and took her fourth win to lift the historic CORA TROPHY.

Analysis: Although the DBSC boats are potentially faster upwind, they appear to have less power than the International 12s on the off-wind legs. At the end of the day the three podium places were taken by the international 12s. The top two boats were sailed single handed which gave them a power to weight ratio advantage in the light winds over the crewed boats.