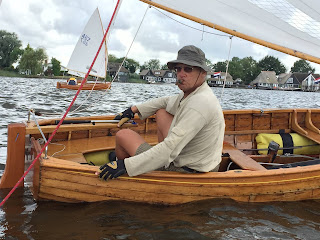 The Funeral video (Password 813A1E95) with pictures, youtube videos and speeches. Most of the time in Dutch. Available till 19 Mai 2021.

Pictures of Bert Hamminga and also his funeral ceremony on 26 april 2021.

Rod Andrew (OK dinghy sailor): I was looking for a quotation running round my head, but it wouldn't come to me, but just did! The French poet/ chanteur/national treasure Georges Brassens, was quoted as saying, '..and if I'm not 'normal' it's because I don't want to be; there are enough normal people,- let them get on with understanding each other!' ...There was something of this in Bert.

Steve Bulmore from England postscript after reading this blog article 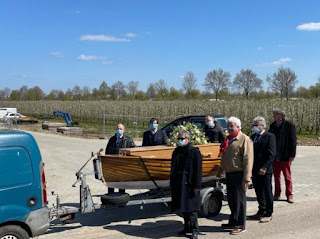 Ireland in the past 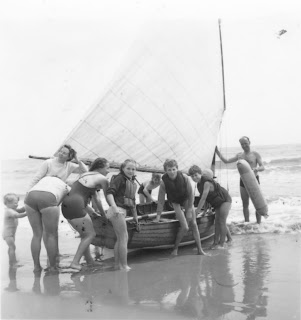 
Seamanship Training for the Conway Family.
Camper and Nicholson of Gosport and Southampton built an International 12 Foot Dinghy c.1921 for Lieutenant Colonel, the Honourable Claud Maitland Brabazon, son of the Earl of Meath, whose estate was located at Bray, Co. Wicklow, Ireland. Because she was part of the international class, she was allocated sail number K29 by the Yacht Racing Association. Claud raced his dinghy, which he called Gadget (without great success in the trophy department) on the south coast of England and from the Isle of Wight. Having been involved with flying ships and balloons during the great war, he was a man familiar with gadgets. He returned to Ireland with Gadget in time for the 1928 sailing season, and raced Gadget at Seapoint Boat Club, which is located on Dublin Bay, a few kilometers south of Dublin city. When that club collapsed, he used the 12 Foot Dinghy to teach Sea Scouts all they needed to know about seamanship. By 1935, Gadget had been sold to a member of Howth Yacht Club, located north of Dublin. That club had established a 12 Foot Dinghy class in 1930. By the early 1960s, Gadget had passed through the hands of several owners, and was in use training the extended Conway family in seamanship. Three Conway sisters, Peggy, Oonagh and Pat along with their eight children were taught how to sail by their uncle, Richard, off a beach located not far from the Earl of Meath’s estate in Co. Wicklow. Progressively the children grew in confidence, and the older children were permitted to sail unaccompanied, on condition they remained within sight of their uncle sitting on the beach with a pair of binoculars. One of those children was to later race in a half ton yacht, built in the 1980s at great expense, by the same Camper and Nicholson boatbuilders. She was called Ace, which was later amended to SpACE Odyssey. Although Ace will not take part, we are confident that Gadget will enter the 12 foot regatta in Monaco in September this year.
Gepost door Pieter op 02:20 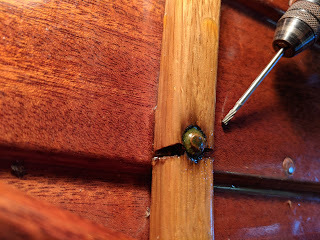 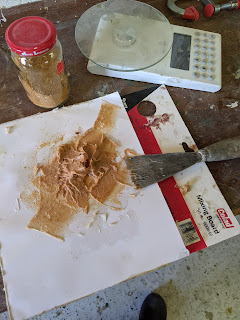 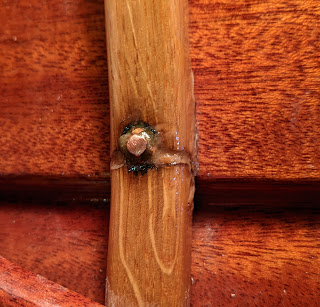 Beetje lak eroverheen en het probleem is opgelost. Jollen tandarts..een mooi vak :-).
Zie ook foto album reparatie spant
De oorzaak dat spanten weleens willen breken? Het tijdens de bouw lamineren van spanten is beter, maar ook veel werk. Maar de oorzaak is vooral de grote krachten op een jol, die altijd voor vervorming zorgen. Zeker bij windkracht 6 of meer en helemaal als je met twee zware personen gaat zeilen in een 12voetsjol. Daarom is het goed te overwegen het achterlijk van het zeil wat kleiner te maken volgens het 1913 origineel. En met 2 man zeilen alleen toe te staan als je de hele serie op deze manier gaat varen. Net als in Italië. En ook wel zo leuk voor je bemanning.
Na afloop kreeg ik deze reactie van Martin Royle uit Engeland. Hij pakt de renovatie nog veel grondiger aan. De tekst en de foto spreken voor zich.
Hi Pieter,Just read the latest post on your blog & very unusually I have to take exception to your solution, in the politest way possible. I feel your repair method offers no additional strength to an already compromised rib section.I have had many broken ribs to fix over the years, not just on Fubbs but 19 out of 24 on my latest National 12 restoration has been a bit of a mission! So I have some experience. My first action with any break is to find out what was the cause & to make sure it can’t happen again. So I would always cut a 1:12 scarph joint to each side of any break as a bare minimum, over more fastenings if possible? I use an angle grinder to carefully grind back the roves off any nails that need removing, then hammer the nail out. If the break is on a bend (they usually are), I usually laminate an over long repair rib section from thinner strips of Oak, laminated on the inside of the hull next to the broken rib section to ensure the correct shape. Then I cut the scarphs to both rib & repair & drill for new nails, ensuring at least one nail passes through the new scarph joint which I glue with epoxy. This repair technique thus spreads any loading on the rib in the future. Photo below shows a few of these rib repairs at dry fitting stage.Best regards,Martin 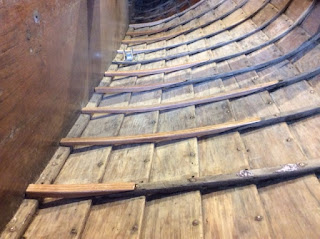