100 year dinghies in the Netherlands

From 27 till 29 June 2014 The Twaalfvoetsjollenclub will organize a big event at the Loosdrechtse Plassen in The Netherlands. The event commemorates the 100th anniversary of the “A” Class 12 Feet One-Design Dinghy which was accepted as a national class in the Netherlands and Belgium in April 1914. Over 100 classic wooden dinghies are expected to come to Loosdrecht. Projectleader is Leen van Willigen. Also a centennial book will be published in which the 12 foot dinghy history will be extensively described. The authors are Dolph Blussé, Remmelt Kraneveld, Lia Dudok van Heel, Wietske van Soest, Steve Crook and many other contributors. 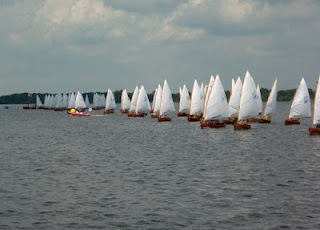 Beulakerwiede 2004. 90 year dinghies in the Netherlands. 100 dinghies at the starting line.