What will the Dutch decide

Saturday 26 January 2013 is the annual meeting of the Twaalfvoetsjollenclub in the Netherlands. What will the Dutch decide. Henk van der Zande is the chairman of the Dutch Twaalfvoetsjollenclub and has a dilemma concerning the international sailing in 12 foot dinghies. There are four options. This is the analysis for the meeting. Will it be option 1, 2, 3 or 4.  Read it february in the blog 12footnews. 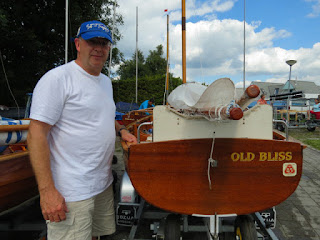 Already in the 20s and 30s some Dutch dinghy sailors crossed the country borders to participate in sailing competitions in other countries. At that time, there was little discussion of standardization, because the class was international. That is quite different now. Especially the last year there has been much debate and argument on this subject. The latest Dutch bulletin was full of it.
Reinhard Schröder, Fred Udo and Pieter Bleeker experienced everything at close quarters. We would like to share our thoughts about it with you, so that the subject can be discussed at the annual meeting. At the end of this letter we will outline a number of scenarios for further discussion.
But let's start with the past. The dinghy has been an officially recognized international class until 1964 and thereafter every country had its own way. The Netherlands remained faithful to the classical principles, while the Italians modernised the boat. In the 80's there was much exchange between Italy and the Netherlands. Already at that time differences in the equipment emerged. They are visible, if you have a good look at the pictures from that era. Aluminium rudders behind wooden dinghies, aluminium masts, plastic dinghies. Plastic penetrates in most traditional wooden classes and usually that's the beginning of the end for wooden boats. Except .... in Italy. In 2007, six Dutch dinghies went to Naples to sail against exclusively Italian wooden dinghies. This was a great success and from there wood had a good start. In Italy 17 new dinghies were built in 2011: 15 wood and 2 plastic. From every 3 dinghies are now 2 polyester and 1 wood. But the wood of Italy is not the same wood as in the Netherlands. Our rudders are heavy, the masts are heavy etc. Still the hulls are reasonably the same.Giorgio Pizzarello ordered in 2008 by van der Meer a dinghy, that obtained both a Dutch and an Italian certificate. The boat was not fast enough in Italy. No problem, if you're here and there drilling holes in the brackets, throw in a hollow mast, lightweight floorboards etc., you can save about 20 kg. One then adds an Italian rig with a multitude of trim lines. With gentle wind you are a lot faster, but ... you're still not as fast as a polyester boat in light weather. In strong wind Italian wooden dinghies can still be competitive. In 2011, a wooden dinghy with excellent sailor Paolo Viacava won even the Italian championship. In 2012 there was little wind and the first wooden boat was number 18. Is the game still fun if we play it this way? No, not really, and certainly not for the Dutch and other foreigners with their classical dinghies. This is proven in Portoroz and Lucerne, where there was no competition at all. Also in Italy one reluctantly acknowledges now that there are differences in speed and that there is actually three kinds of dinghies: modern plastic, modern wood and classic wood. Grosso modo the Dutch boats are classic wood and in Italy one finds modern plastic and modern wood. Each of these three parties do not budge an inch if one tries to negotiate about standardisation. The consequence is that, even in Italy, one talks about an internal schism. France, Switzerland and Germany are the victims of this situation, because what side should they join? And which way should the Netherlands go? If we allow modern wood and plastic, we draw the short straw. Classic wood has lost in each class. See the 505, the Olympia dinghy, the Vaurien. Do we want anything like this in our 12 foot dinghy class organization? None of our 350 members and 250 certificate holders would like to see our cultural heritage vanish. But what should we do? Close the borders? Deny that there are dinghies abroad? Should we race together with modern plastic during the worldcup 2013 in Naples?. Something the modern wooden dinghy sailors in Italy are fiercely opposed to. Anyway three separate classes with three starts and three classifications is not really fun. Racing with a few Dutch, Swiss, French and Germans is not really what one expects of a competition in Naples. In this case you might as well stay home and go to the Sneekweek.
In short, there are numerous dilemmas and yet something has to be done. Every dinghy sailor is now looking at the members of the Dutch Twaalfvoetsjollenclub. What will we decide: Staying together as an international dinghy friends club or prefer serious competition sailing in one design boats. The latter is at this moment unfeasible in international competitions and therefore we see four alternatives:

1 Close the borders
We are solely a national class. We no longer go abroad ... The Dutch have a saying for this: "In this way we throw with the bathwater the baby away "

2 All dinghies start together in international events
A joint start and then three classifications: modern plastic, modern wood and classic wood. The Italian class organization is a strong supporter of this, but modern wooden dinghies in Italy are fiercely opposed. The danger for the Netherlands is: modern plastic and modern wood are faster and become increasingly popular. Classic wood would be classified as a museum class. See numerous examples in other classes.

3 Separated starts
Modern plastic, modern wood and classic wood start not together is the rule, because the speed is not the same. It actually means a separation with Italy, because in this case we have hardly anything in common. The role of the International Organization 12 foot Class will become smaller. Perhaps we should establish an international classic dinghy class organization, together with the Germans, the French and other lovers of classic dinghies. The recently established International Friendship Series is a good way to promote classic wood.

4 A compromise
A separate section classic wood is set up under the umbrella of the International Organisation 12foot Class which has a neutral president. The start arrangements will be defined for every race separately. Less competition and more fun. It might also help if all “international” trophies: Cockshott (plastic), Swiss and Global (modern wood) and Friendship Series (wood classic) all be abolished along with the current World Cup. Friendships are strengthened by sharing and the exchange of boats or rigs in competitions open to such arrangements. An example is the Kaag Regatta, which already during numerous year is called “the International Friendship Regatta”