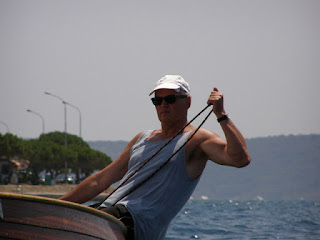 Dinghy sailor of the month July: Albert Helder. At the age of 27 year he was the best sailor in the Netherlands. Two times Dutch champion in the strong 16m2 class and winner of the PIP: the champion of all class champions. After that he has stopped with sailing regatta's, till he became enthusiast about a classic dinghy in 2012. He is now almost 70 years old and still a very tactical sailor. You can met Albert in West Kirby end of july. The picture is taken in Portoroz, Slovenia in 2012 while we were making a fun trip to Piranha with the dinghy.