Wim (48) and his son Marcel Bleeker (17) Dutch champion 2013. In the seven and last race there were only two candidates for the title. Wim/Marcel Bleeker and Martijn/Bob van der Pol. Wim decided to go alone in the last race. It was beaufort 4 and he had to work very hard to beat Martijn and Bob. But finally he was successful and for the first time in his live Dutch champion.

Walter Bleeker (54) at the right side on the picture is also thinking to buy a dinghy and participate at the dutch championship 2014. 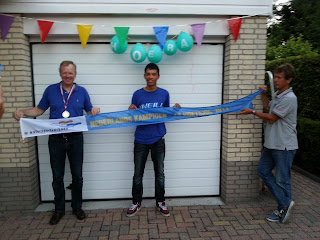