The winner of the friendship series is...Reinhard Schröder. 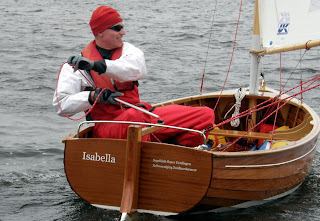 The Dutch champion Wim Bleeker finished as number 2. He was number 1 at the Kaag and West Kirby. But in Laboe he was not in a good shape. Number 3 Willem de Boer and number 4 Duuk Dudok van Heel. See the complete list of the friendship series. Reinhard Schröder was the only sailor who participated in all the four friendship regatta's, organised in France, Netherlands, England and Germany. Totally 72 dinghies are on the list, from 9 different countries. The 12footCWC organisation is very satisfied about the results in the first year. There are thoughts about the 2014 edition. In a few weeks everything will be more clear. The friendship series is just mentioned for the real classic wooden dinghies with the same philosophy and speed. The French class organisation dinghy 12 Classe France will decide where the main event will be organised, probably somewhere in july or august.