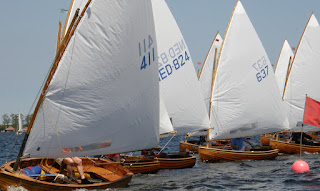 The Dutch Twaalfvoetsjollenclub has three regions: North, West and Loosdrecht. All regattas are regional regatta's, nobody likes to travel a lot. There are four exceptions, these are the national class events where every Dutch dinghy sailor should be:
If you are a foreigner and you want to participate, you need:

Total costs of measurement certificate, starting license and membership of a dutch sailing club, about 100 euro per year. Sent an email and we will help you with the administration.
Kaag is the international dinghy event of the Netherlands. The Watersportverbond has given a dispensation: dinghy sailors from other countries with a classic wooden dinghy and a measurement certificate of their national authority are allowed to participate. Three loan boats are available.

The International regatta schedule of the Twaalfvoetsjollenclub is the Friendship serie